Garib, with its size of 18000ha, is located on the edge of the Khomas Highland Plateau and the northwestern Kalahari edge. The height above sea level is 1450m. The average precipitation is 275mm per year. The dry river “Schaafrevier” is the northwest boundary. A mountain range forms the southern farm border and close to the farmyard another mountain range runs to the southwest.

Numerous Kudu bulls like to stay here and usually like to leave their covert only in the rutting season. The habitat is very diverse but is dominated by red with bush overgrown Kalahari dunes. The dips between the dune strips are called “streets” where camel thorn trees (Acacia erioloba) and several grass varieties represent the flora.

On Garib herds of Springbok, Oryx and Hartebeest leave their tracks. Steenbok, Common/ Great Duiker and Warthogs are everywhere. The game stocks are vital and healthy whereas the Warthogs density is slightly thinner compared to other parts of the country. Because our farm boundaries are not fenced game proven there is a constant genetic exchange which has a very positive impact on the trophy quality.

Predators on Garib are Cheetah, Leopard, Brown Hyena and Jackal. With three out of four neighbors we have a cross-border trophy hunting agreement that will give us the total of 53000ha that we can hunt on.

Farm Garib was founded in 1910 by Hans Lühl from Westphalia and our children are the 5th generation on the farm. You will stay in a separate cozy farmhouse on our homestead with 3 bedrooms, 2 bathrooms and a large living room with veranda where you can be in the group or family for yourself. Renovated in 2016, the guesthouse has a cozy ambience where you can enjoy campfires in the evening. In addition, there is a 2 -bedroom apartment with bathroom. We only have one group at a time to really meet every guest’s needs. Many meals are usually made from venison that are tastefully prepared in the farm kitchen.

The hunt takes place exclusively on stalk by foot or by still hunt. We oppose shooting from the car. We hunt according to the principles of the Erongo Verzeichnis which emphasizes that we only hunt wild game in its historical habitat and that the game can escape beyond the borders.

A typical day of hunting starts with a breakfast and after that we usually drive out to the starting point of our stalk. There is usually plenty of sight during the drive and in a remote location we decide how to approach the game. Glassing of hills, dunes and mountains has often proved successful. The best thing to do is to hunt without a special target and to be surprised by what the hunting day has to offer. Approaching the game is not easy in Africa and stalking is often done in any kind of gait.

We try to keep the shooting distances under 150m, as after strenuous stalking the physical condition usually does not allow long shots. Most shots on game are fired from the shooting stick and this should be practiced beforehand by each hunter: standing, sitting and even lying down.

In the hottest part of the day you return for three hours to the house where a freshly prepared lunch is waiting. In the afternoon a similar program applies as in the morning. If day trips on zebra or hunting in neighboring areas take place, a food box and soft drinks are packed and you usually return home after dark.

Caliber and bullet choices are best discussed with the professional hunters before the trip. 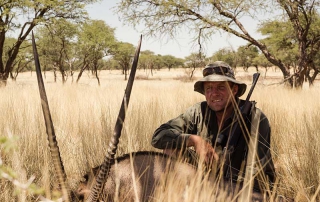 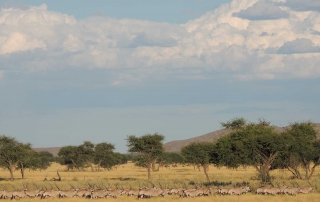 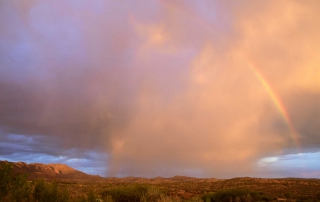 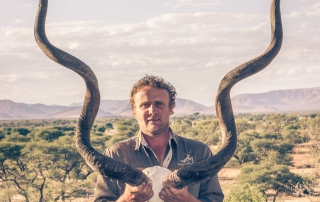 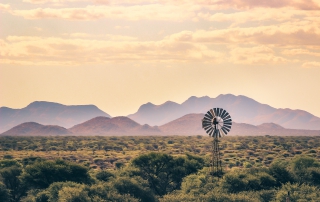 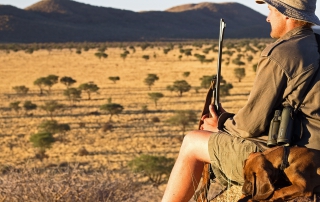 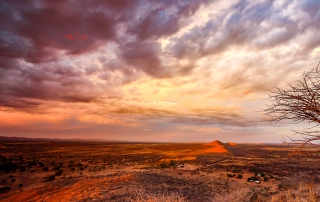 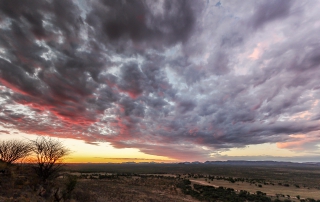 We understand hunting as applied conservation and sustainable use of our precious resources. Namibia offers exceptional landscapes, outstanding wildlife and true adventure. Come hunting with us, and let us make your safari an unforgettable experience!